Madeira is a Portuguese Archipelago which is located in the north Atlantic Ocean (Figure 1). It is one of the Portugal autonomous region. This archipelago consists of some islands and main islets. They are Madeira Island, Porto Santo Island, Desertas Islands,[1][2] Selvagens Islands.[2] From those islands and islets, only Madeira Island and Porto Santo Island have inhabitants,[1] Desertas and Selvagens Islands do not have permanent inhabitants.[2]

Figure 1. Madeira Archipelago in North Atlantic Ocean[3][4]
Funchal is the capital city of Madeira Autonomous Region. The city is located in the south cost of Madeira Island. It is a modern city with the number of population around 100,000 inhabitants. Tourism is an important sector in the reason it contributes GDP around 20% to the region. The island of Porto Santo (9 km long beach) is entirely devoted to tourism. Over the past decade it has recorded a substantial increase in its hotel accommodation capacity. Development in Madeira is considered to have future potential since the necessary infrastructure has been established and adequate investment incentives have been introduced for expanding its hotel and catering structure in a controlled manner. Nature conservation is seen as important because it is a major draw for tourists to Madeira.[1]

Background of Renewable Energy Development
The regions present some specific problem of energy supply and the major energy networks (natural gas and electricity) are not available and are not expected to be. As the consequence of the isolation and distance, this archipelago are very dependent on oil products and energy supply (electricity supply). Oil products and a relatively small dimension of the energy systems are transported by the maritime. Major oil alternatives are usually not feasible in these regions. In the other hand renewable energies and rational use of energy are frequently attractive due to over-costs and higher prices of energy supply and the availability of natural conditions. Insular regions seem to have ideal conditions for some development of new energy technologies.[2]


The Energy Performance
The primary energy sources in Madeira Archipelago is represented by the local resources around 8% and the rest is imported oil products around 92% (Figure 2).[2] 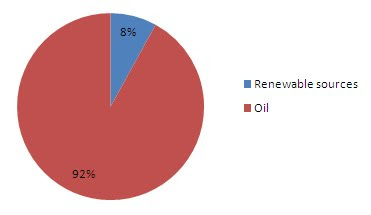 Figure 2. Primary Energy Sources 1997[2]
The local energy resources which have a high share in the regional energy balance of the archipelago are hydroelectric and forest biomass (firewood). Biomass is used to produce heat in residential and industrial sectors. Other types of energy, wind and solar have a share not so high but still considerable important as renewable energy sources (Figure 3). Those both energy sources have a relatively high potential to be developed in the future. The energy from solid waste in the waste treatment plant is possible to be established in the future to produce energy.[2] 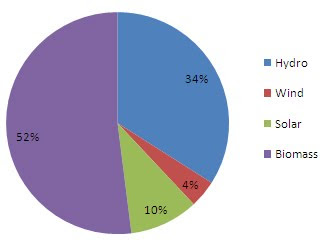 Figure 3. Renewable Energy Sources 1999[2]
Regarding to electricity production in the archipelago in 1999, the contribution of hydro energy was 16% and wind energy was 2%. The remaining was diesel with around 82%. Energy from diesel was produced by diesel power plant using fuel-oil (Figure 4).[2] 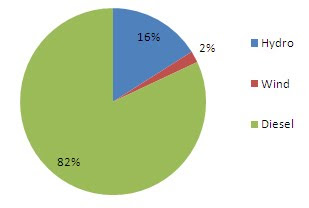 Figure 3. Electricity Production 1999[2]
For Madeira Archipelago, local energy resources and the rational use of energy are very important to reduce import of energy (Table 1). A large of potential savings was estimated in the residential, buildings, transports, and industry.[2] 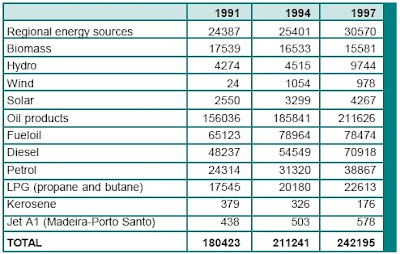 The load demand of electricity in the peak period is 100 MW and in the off-peak period is 35 MW. There is an increasing number of demand corresponds to an average growth of 7%/year. In 7 years the electricity demand increased from 261,30 GWh in 1990 to 418,08 GWh in 1997. The increasing electricity demand is due to the residential and the tertiary sectors. In December 1997, the annual peak of demand in Madeira Island was 100 MW. It was 5.4% higher that the peak in 1996. The peak in Porto Santo Island in August 1997 was 4 MW. It was 5.3% higher than in 1996 as the result of the tourism demand. The total electricity consumption in 1997 (final users) was 418,08 GWh, which 405,02 GWh belonged to Madeira Island and 13,06 GWh belonged to Porto Santo Island. This number showed an increasing of 4.5% in Madeira Island and 9.9% in Porto Santo Island compared to the number in 1996. During the next decade, the growth of the electric power supply capacity will be essentially based on the thermal production. It is not forecasted a large development on renewable energies for the near future to follow the increase of the demand.[2]


Renewable Energy Development
In the 50's the first steps are taken to exploit hydroelectric power. At present an ambitious strategy of RES valorisation has been designed, embracing all the renewable energy sources available on the island.[2]

Hydro
Water is used for many purposes (drink water and agriculture). During winter, it is used for energy before finally is rejected to the sea. Water sources is available at high altitude (>1000 m) and is needed at low altitude.[2]

Biomass
Biomass used comes from firewood and forest residues. It is used for heating, hot water, cooking and baking. The quantities of firewood and forest residues are 30,000 tonnes for residential (mainly in rural areas) and 9,500 tonnes for industrial, other sectors 2,500 tonnes. There was a project of waste treatment plant which will include incineration with energy recovery and a study of biogas production from animal waste and slaughter houses.[2]

Labels: Region aimed at self sufficiency

International Study of RE-Regions is a study about regions which have desire or have achieved 100% self sufficiency in utilizing renewable sources to generate energy (electricity and heat).

The aim is to learn "How to implement a renewable energy concept", by taking experiences from many regions in gaining their target to be self sufficient regions with renewable energy.

It is a part of internship report at ZEE (Center for Renewable Energy University of Freiburg) which I have finished in the year of 2010. The overall report of the internship can be viewed in "My Internship" or http://myinternship.yolasite.com.
Note:
Due to the internship has been finished in the year of 2010, all the content and context of the International Study of RE-Regions are under the responsibility of the writer and are not related to the EE-regions project and the ZEE.
You are welcome to give any feedback related to this international study.

Janice Rafael April 13, 2013 4:46 AM
I simply love what you have said here but I think you could do a bit more to let readers connect with your content better........ (see more at Republic of Cyprus, Cyprus Island)
Alastair Dodwell April 6, 2013 4:43 AM
Thanks for post! Wow nice Wood chip & pellets Supplier in UK ........ (see more at Prince Edward Island, Canada)
Alternative energy Kent November 25, 2012 10:47 PM
Alternative energies is the best source for energies. There are many different advantages like ........ (see more at Region of Liguaria, Italy)
Steven Parker September 17, 2012 10:13 PM
Great thoughts you got there, believe I may possible try just some of it throughout my daily life ........ (see more at Dongtan Eco-city, China)
James Jones July 31, 2012 5:44 AM
Highlighting regions is such a good idea, but I think it should be taken in more combative way. Being an enemy of eco energy in the modern world is embarrasing .......... (see more at Renewable Energy Park in the Corfu Island, Greece)
Sector reports July 23, 2012 10:32 PM
With the passage of time, the development and urbanization of the society led to a shortfall of fresh water in Germany ...... However, the devil has begun to raise his head ............. (see more at Canary Islands, Spain)
Anonymous June 29, 2012 9:17 AM
Asking questions are really nice thing if you are not understanding completely, but this post provides fastidious understanding even ........ (see more at Isle of Turiguano, Cuba)
Prolight systems June 19, 2012 4:26 AM
Great article and useful weblog. Thanks for publishing this. It's useful and informative. Keep up the great ........... (see more at Renewable Energy Park in the Corfu Island, Greece)

The idea of international Study

The idea in creating international study of RE-Regions was originated from DR. Chantal Ruppert-Winkel. She was my supervisor at my internship which I had finished in 2009. I did it in Institute of Forestry Economics University of Freiburg, Research Project "Socio-Ecology of Self Sufficiency".

Actually this study has been just a task in my internship. But, I considered it very serious. That's why after some sessions of discussion, I thought that it could be very pleased if I can make it online. In addition, I need to express my study result "freely". Also, it would be nice to share this knowledge to anyone who interested in it.

DR. Chantal had approved my "creativity". She gave me three requirements to be fulfilled. The study should be online without any border of an area or place. It should be easy to be accessed by anybody. And it should be "online without limitation of time". I agreed to fulfill it. So, here are the result of the study.